Gods Walk Amongst Us 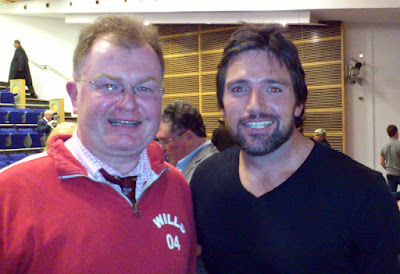 One of the benefits of being a London Society ref is having Twickenham HQ on our patch and a couple of international referees in our midsts. Last night Wayne Barnes and Steve Walsh held a Q&A ahead of this weekend's international appointments. They have much in common, both having started refereeing at their teens and taking charge of their first international in their early twenties, as well as being subject to some one field controversy. The difference between the besuited ex-lawyer Barnes and the laid-back surfer-dude Walsh is also marked.

The early conversation focused on Barnes and the lack of red card for Bradley Davies, he made the valid point that he needed to trust his assistant and having watched the replay both Wayne and Pearson clearly admit it was a red card. Another senior referee told me that Pearson's reason for not recommending a red was that he claimed he was too close and could not be sure of the height from which Davies dropped the Irishman. Seems to be a bit of arse-covering if you ask me. Later Walsh did admit that he recognizes that he and other referees are happy to be less strict that the disciplinary committee, he sees a Red Card as something that is instinctive, if he doesn't have the gut feeling then he will Yellow Card and let the citing officer deal with it.

I have spoken before of Barnes' refereeing style and I think it is one that all top refs aspire to, only blowing up if he judges the offence to be material and his intervention really necessary. He said that players want to run about, coaches want their players to run about and spectators want to watch rugby. I have found that trying to implement this strategy has improved my game. Both referees agreed that knowing when not to whistle is what makes a good referee. Given this I find it strange that one of my Twitter followers thinks Wayne is faster to his whistle than any other referee, Barnes' view of being a ref is that its not his ambition to be popular or well know, at least he's half way there!

There was a poignant discussion of Steve much publicised fall from grace and now, his redemption. He described that much of his life he has been angry and used rage to compete, this has seen him get into trouble as a consequence. Whilst the booze wasn't the cause of this, he admitted it made it more difficult to control his demons. He is now tee-total and attends Alcoholics Anonymous, he has learned to let go of his rage and is more at peace with the world. He was very frank and open and some even suggested a post rugby career in life coaching rather than opening a supermarket would be an option.

Both Barnes and Walsh gave some good development tips particularly finding someone you are comfortable to confide in and trust yourself; what has taken you to your currently level will take you further. Don't change your style as you progress. Barnes admitted that he does watch video of teams he is due to ref and speak to players to get rid of penalties before they happen. They agreed it was important to have key conversations read in your head, speaking to players about problems and dealing with discipline are things that need to be rehearsed

Finally the inevitable scrum question, why is it such a mess at the top of the game? Both agreed that it is the desire to win the hit but the punitive (and random?-ed) response of referees has been changing behaviour and that teams are now prepared to loose the hit rather than concede a penalty. Steve reminded us that the iRB is coming to the end of a two year review of scrummaging, he said there is a really worry that the hit will be removed completely, in the face of this coaches are keen to be seen to be complainant rather than loose what is a vital part of the game. That said, it could be argued that the hit is something that the iRB managed to manufacture in the first place.

I am sure Mr Walsh will listen to me about who should win tomorrow's game rather than all that English pleading, he did admit that there would be a big focus on tackler assist releasing.

Nice blog there. As a current referee, what do you think of the new white card being used in supr Rugby this year. Do you think this will benefit the game, or do you think it will result in refs using the white card as they might be afraid to make a big call??

I think the white card is just for TV to let the punters know that they have seen something, noted and get on with things. Top games are reviewed by refs and coaches and any foul play will get picked up and cited in any case.
Both Barnes and Walsh made it clear that unless it is crystal clear they are going to err on the side of caution. Minimum sanction they can get away with and let the disciplinary committee deal with punishments. Keep the game a contest.