No home club house today, instead it's down to a local pub for refreshments. Some loitering got me an excellent pint ofSpitfire. 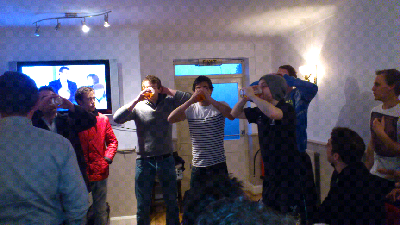 Posted by Unknown at Saturday, January 28, 2012 No comments:

Is it time for a shake-up in scrum laws? | Scrum Five
Lets get this straight. This is only a problem at the top of the game. Down the leagues most props scrummage, scrummage illegally and refs will have a stab at what is going on. If the ref is unsure, as long as its safe he will guess or let them get on with it.
At the top of the game it is not about a contest for possession but a contest for the quality of possession. If a prop has lost the hit and feels he can not dictate the quality of his own or opposition possession then he will drop it in some way. There is very good chance he will get another go because the ref is on the wrong side to see what he has done.
It has nothing to do with the surface, again look at the lower leagues, it has something to do with the shirts but it has much more to do with props cheating and preparing tactics based on analysis of the ref and the opposition.
There will be a change before the next RWC, the call of pause will be going but the length of the pause should still be varied, especially if there is a problem.
I am coming around to Brian Moore's view that managing the crooked feed and early engagement and the rest looks after itself. There is a good case for the "ball in" call being ref lead rather than the engagement as all problems stem from dictating the hit.
Posted by Unknown at Thursday, January 05, 2012 No comments: