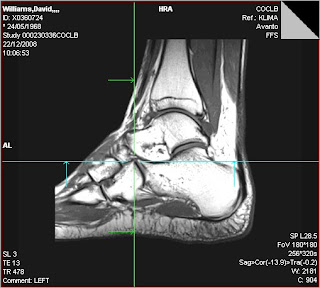 Not many game reports recently as I've injured my ankle, a suspected osteochondral defect, out on a light jog. After 3 weeks of physio I tried reffing only for it to flare up. So it off to a surgeon and to have scan and lets see what he says. In the mean time if anyone wants to analyse the scan image feel free.
Posted by Unknown at Monday, December 22, 2008 2 comments:

How many Scots will become Lions in 2009?

How many Scots will become Lions in 2009? - Telegraph

Answers please on a postage stamp, should the question really be how many English players are justified on the Autumn tests.
Posted by Unknown at Friday, December 19, 2008 No comments:

Luckily they don't mind England Stars getting physical with the public in Bath.

Now lets see how that Gloucester - Bath rivally plays out on this on!

Mind you, I'd wager my Granny verses Guscott; Lesley, well you won't tell him its a girls name would you?
Posted by Unknown at Thursday, December 18, 2008 No comments:

Dear readers, are we surprised to here the pleating from....an Aussie!

The goldfish-like attention span of the average Aussie supporter might need a larger and larger fix of a more shallow product. However, the pipe line of new players and supporters has never been stronger in the NH. 72,000 for a club match in Paris, 50,000 at Twickenham. What size is Thurmond Park now? These are crowds NZ and Aus are lucky to get at full internationals!
This fan base was formed under the traditional laws, it wasn't broke and doesn't need fixing. I fear that rugby now has too many administrators trying to justify their jobs.
Posted by Unknown at Thursday, December 18, 2008 1 comment:

Those that worry about rugby going the way of soccer get plenty of ammunition here.

"England's managing director whinged, the coaches warned the ref that England would cheat, the captain had no authority and the players no discipline. Collectively it warranted a straight red card"

I am beginning to think the Telegraph reads this blog!

" forwards coach John Wells said: "I had one skill as a player: I knew how to cheat and cheat well. We've got to make sure we're smart if issues develop."
Wells might as well have written the referee a letter saying that England intended to go in for a spot of serial cheating against New Zealand "

At least we now know that the England team do listen their coaches.

"Martin Johnson's first task in the new year is to send Andrew, Wells, Borthwick and the entire England squad on a crash course in refereeing.
Who ever thought we would see the day when the England rugby team needed to sign up to football's Respect campaign"

As an RFU referee, if a player or a coach is disrespectful to me in the club house, I am encouraged to report it. The very public criticism of referees this autumn series is setting a awful precedent for players at all levels of the game. Pass on your concerns, far enough, but press conferences are not the conduit for disparaging the ref.
Posted by Unknown at Wednesday, December 03, 2008 No comments:

Email ThisBlogThis!Share to TwitterShare to FacebookShare to Pinterest
Labels: england

The pre-match entertainment at Twickenham kicked off with four girls in evening gowns playing some rock-cum-classical arrangement. It dawned on me what it was; Kashmir by Led Zeppelin
Not entirely sympathetic to the victims of the Kashmiri separatist nutters running amuck in Bombay, don't you think?
Posted by Unknown at Monday, December 01, 2008 No comments: 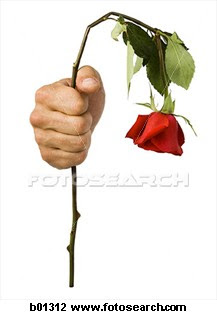 Before I injured my ankle I was already going to Twickenham on Saturday, despite the excellent hospitality, it would have better entertainment to have watched the Welsh game.
England have to question why the referee was cause for such comment on Saturday and against Australia.
Regular readers will know I don’t usually commentate on other refereeing performances but in light of the disgraceful England display it provides and opportunity to illustrate a couple of game management points.
The level of indiscipline displayed by England on Saturday would have shamed a Surrey 3 Vets side. I was listening to the Ref-link and Alain Roland was very clear that he was prepared to bin as many as necessary to get his point across, yet still England’s penalty count mounted and the players walked. Many will come up with the usual bleat about how New Zealand gets away with murder. International referees won’t get everything right, they will get far more right than me, but they will be consistent and will treat both sides fairly. All referees will interpret Laws and how they see the game slightly differently but it will be the same for both sides. The difference with players like Richie McCaw is that they learn very quickly how the referee will be applying the Laws and adapt their play accordingly. England were such slow learners, they deserved to be held back a year.
Different sanctions for fowl play will depend how teams are responding to verbal warnings from the referee. On Saturday, Roland had warned England a couple of times about killing the ball before yellow came out. There was no discussion with the Kiwis, effectively both sides get a couple of ‘free’ goes, England used up their extra lives very quickly and paid the price.
To be fair to England, they seem determined to front up to New Zealand and give them a physical encounter, the Haskell card showed that this stretched to cheap shots but a few other flash points failed to provoke the Kiwis. Flood’s high tackle was accidental but reckless and dangerous too; at that level players are expected to have much more precision. Again, in the context of everything that was going on, the referee was extremely frustrated and the sanction was probably tougher than if that had been an isolated incident. Keep the referee sweet and you will be rewarded.
The sad thing is that England game plan appeared to be limited to stopping New Zealand playing rather than bring anything constructive to the party. Thankfully, my afternoon was saved by Lee Byrne’s try against the Aussies, as sweet a piece of rugby as I’ve seen all autumn. I am certain Alain Lewis was a much happier referee on Saturday night than his countryman Mr Roland
Posted by Unknown at Monday, December 01, 2008 No comments: