O'Neil at it again

If anyone can slap down the motor mouth O'Neil it is the Dude!
australian & new zealand whine
It was much better when they only came very couple of years anyway.
Posted by Unknown at Friday, October 31, 2008 No comments: 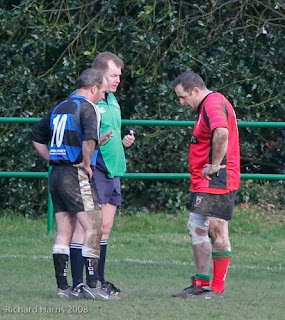 Another sunny afternoon, but thankfully chillier than late. I am going to grant anonymity to this week’ teams to protect the guilty, in what was a frustrating game to referee. I’ve had some challenging level 11 games in recent weeks, were the speed and skill of players required quick thinking and good control; players were generally positive.
On Saturday it was a level 14 friendly and the drop in skill was marked but the disappointing aspect was the negative play. The home side, Red, were the better drilled team with the higher fitness, I had reffed them last season and clearly remembered a couple of bad tempered characters, though the captain was a calm and reasonable fellow. As with the opposition, they combined a mix of youth and old timers.
The visitors soon looked to be out gunned up front but scored an excellent first try though a fantastic angled run from the fly-half. The penalties soon started coming thick and fast at the tackle area. Both sides seemed unable to stay on their feet or roll away from the tackle. Red responded with some ill-disciplined foot work which resulted in the warnings of cards being issued. A mouthy critique of my performance from Red’s second row saw the team marched back 10m at least twice.
The visitor’s defence held up well, but they failed to roll away from the tackle and this frustrated me and the opposition. It’s a hard line to decide whether it was cynical or old-age, I suspect a mix of both. The frequency of the offences gives me a couple of options; a) whistle on very occasion (and destroy the game),
b) stretch the bounds of what is a material offence (and stretch the patience of the opposition) or
c) yellow card people and hope that gets the message across.
In this case I went for mixture of a) and b), the third option is not what 3rd team rugby is about when the fitness and skill levels are challenged and none of the offences where in the red zone. What ever I did, I was on to a loser but you can only give players the game they want to play. Red were still managing to lead comfortably but the level of chat was still too high despite shorter tolerance that previous matches.
The second half saw the visitors tire and the cheating become more blatant, the Red chat became more pronounced. I needed to make and example and the new hooker’s call of “not straight ref” saw me penalise Red there and then. Soon after, more foot work on the tackler on the floor saw a Red player spend 10 mins on the touch line. The visitors’ no8 started to be more obviously offside, at one point he managed to pick up opposition ball from a scrum. As he also used his position of pack leader to discuss referee discussion too vocally, I think, in retrospect, he too should have cooled off for ten minutes. The missing Red player seemed to galvanise his team mates and they put the game beyond doubt with two well taken tries.
As there was no separate referee dressing room I wasn’t looking forward to showering with the home side, but the good humour returned quickly. Not an epic display from me; plus points, the short tempers in Red were kept under control, negative points I failed to encourage a positive attitude to play from the visitors and deal with their cheating on the floor.
An now, a couple weeks off for family affairs.
Posted by Unknown at Thursday, October 23, 2008 No comments:

Tonight I am off to a benefit dinner for Stuart Mangan. It is a tragic story, on 5th April 2008 Stuart, who was 24 at the time, broke his neck, whilst playing rugby for Hammersmith & Fulham RFC’s Second XV in an end of season friendly against Hampstead in Fulham, London. Stuart was playing fly half and the injury, which is extremely rare, occurred in open play. He is now teraplegic.

The greatest aspect of rugby is the brotherhood that battle on a muddy field brings. His team mates have rallied around and are raising funds to support his long term care. Tomorrow they are encouraging teams across the country to “give 2 for Stu”; £2 from every one playing rugby would raise an enormous amount. If you are playing tomorrow encourage your mates to take part. You can find more details here.
Stuart Mangan Appeal
Posted by Unknown at Friday, October 17, 2008 No comments:

Out in the wilds

A relatively long journey out to Farnham this week for merit league match involving, possibly, the most geographically disparate teams in the Surrey leagues, Farnham and Battersea Ironsides. Luckily, I'd managed to remember all my kit first time out this time. Another bright sunny day and unseasonally warm, such that I arrived to find the visitors training in the shade!
It was soon evident that the home side were a better drilled lot (it turned out the Ironside had a lost a number of players to their 1st XV) but the defence from both sides was strong. The first major incident of the match involved your hero on the deck himself. Black were moving forward and the player was well tackled by Green, the tackler's momentum saw his body swing around into my knee. There was a sharp pain and I dropped to the floor in some discomfort. I did manage to blow up to stop play whilst I received some magic sponge treatment. Luckily there was no lasting damage and play restarted with a Black scrum.
Next up, it was time to demonstrate to players why they know the laws a good deal less well than they think! Green are awarded a penalty (one of too many for offside) and kicked for the corner, they miss and the Black winger catches and calls Mark! Only a handful of Green realise that there can be no mark from a penalty, as I cry play-on. Some how the ball is scrambled into in-goal and grounded by Black for a scrum.
We were well into the first half before anyone scored, sustained pressure from Farnham saw Ironsides scoop the ball back whilst lying on the floor 3m out in front of the posts. I had no hesitation in issuing a yellow card and in retrospect it should have been a penalty try. However, the general good nature of the side probably give them the benefit of the doubt and I choose to stick with the penalty. Quick ball out wide and a converted try meant that at least justice was done.
The second half was fractious affair, the penalty count mounted and back-chat started. The break down became very untidy with players off their feet and on the wrong side. The penalty count for offside became very high as neither side gained momentum. I think I allowed good advantage but it still spoilt what could have been a good game.
Feed back from the captains was generally positive with the winning, Farnham, captain happier than Ironsides. Generally pointers were that I allowed the chat to go on too long, they would have preferred I clamped down earlier and harder - good to know! The other was that the scrummage penalties were over harsh and disruptive. The visitors were hugely out gunned upfront and I was close to calling a cessation of hostilities. Following on from the referee training a couple of weeks ago, I was more confident that I had spotted more dirty tricks and indeed the captain implied that I was unsympathetic due to refereeing higher level games. If only he knew!
An enjoyable afternoon, if scrappy game, Farnham the deserving winners at 18-3.
Posted by Unknown at Tuesday, October 14, 2008 No comments:

A bright autumnal day saw me drive a short distance to New Malden, and then drive back as I realised I’d left my ref watch behind at home. The home side, Old Emanuel looked keen and ready to go, but Old Paulines where still shuttling their team to the ground.
The early exchanges were evenly matched and OPs sensibly took a penalty when it was offered them. Soon after a scrum gave the visitors an excellent attacking platform, the subsequent squeeze saw the OE tight head prop move out and in on the hooker, I gave a penalty which the OPs took quickly and were soon under the posts as the home side failed to react. The Old Emanuel response was immediate, a lovely weighted kick-off was collected on the 10m line by No7 who slipped one tackle and with two nice side steps was across the line. The fastest try I’ve seen.
It was becoming clear that neither side was keen on keeping quiet and persisted in questioning decisions and trying to referee the game. Both sides were marched back in the first half and OE conceded a full penalty. I certainly, upped my game from last season but it did not fully keep a lid on it.
Another penalty saw OP take a 13-7 lead into the second half, a fair reflection on the advantage they held. OE managed the first score of the second period, fired with a renewed enthusiasm but being on the back foot saw OP up their level of back-chat; even in the middle of mauls they still found time and effort to talk. They may well feel aggrieved if someone is trying to pull down the maul illegally, but if the maul does not come down and continues to move forward, I am not going to stop the game- except to possibly penalise them for dissent. Following the second OE try of the half, a vocal description of my refereeing efforts from the try line, meant that the game restarted with a penalty.
The final OE try came soon after as pile of bodies on the touch line saw a hand dart out to ground the ball. I was in the process of blowing up for a scrum and extended my arm instead. A frantic few minutes saw OE look to extend their lead but in the dying seconds OPs took a fine long range try to steal the honours, the two penalties being the difference between the sided.
In the end it was a scrappy game from two sides capable of playing good rugby, but with a need to keep their mouths shut and not bleat like spoilt little children for the whole game.
Posted by Unknown at Wednesday, October 01, 2008 No comments: