He still managed to whistle to stop play, professional to the last
Posted by Unknown at Thursday, April 21, 2011 1 comment:

Another match, another referee gaff. That is very much how the pundits and press see it but on the headline controversy in this match the officials got it right and however the decision was reached it was the right one. Despite his claims, Kingsley Jones makes it look very easy to criticise referees because he has the benefit of 20/20 hind-sight.
BBC Sport - Davies urges help for officials after try controversy
The BBC team do a thorough job of picking up every mistake that Ulster v Scarlets Referee Graham Knox makes, yes there was clearly some inconsistency over side entry and offside, but some of the others I wouldn't class as material errors. What I take exception to is the studio comments from Jason Mohammed and Kingsley Jones, both are 100% accurate but completely wrong. The Laws of The Game do define the role of the TMO but as with all aspects of the LoTG they should be used in context to give players a fair and enjoyable game.
The Scarlets player clearly knocks-on before he crosses the goal-line, with a second pair of eyes the FAIR outcome is this is picked up and the try disallowed. It is sensible that the exact scope of the TMO's remit is flexible to enable the CORRECT decision to be made. We don't want to get to the situation were we winding the game back 3-4 phases looking for a mistake but the knock on was a material part of that try being/not being scored. Even the most one-eyed Scarlets fan would concede that right and fair decision was made.
There is a clear gulf between what media commentators view as the role of the referee and what we see our role being. To the pundits refereeing is black and white, an infringement in Law blow the whistle. Our view is to give the players a game that enjoyable and equitable using the LoTG as a frame work.
Mr Mohammed before you start quoting the letter of the Law be sure you are aware of the following;
6.A.4 (a) The referee is the sole judge of fact and of Law during a match. The referee must apply fairly all the Laws of the Game
Posted by Unknown at Saturday, April 09, 2011 1 comment: 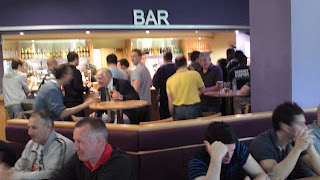 After a feisty game in lovely sunshine, London Ref was looking forward to beer and a chat. However, as a team without a home of their own, the hosts drank at the soccer centre next door to the university ground they use. As if being full of soccer players wasn't bad enough, there was no bitter, not even keg! Ref had to settle for plastic lager. Fortunately both teams were happy to share their (positive) thoughts on the game and keep my glass topped up.
Posted by Unknown at Friday, April 08, 2011 1 comment: