One Yellow and Penalty Try

The #rugby season has started quietly down at Level 11. Only two games so far and another week off duty to come.
The first week was a local match, I even cycled to the ground and it involved a side I’d encountered a couple of times before; the oppo where new to me. I gave a good long briefing to both teams about the summer law changes and new directives. Naturally, most of this was news to the players except the maul law. In retrospect, the subtleties of hands in at the tackle were lost and I think it left them with the impression that hands were fair game from everyone. It did prove useful as at least one turn-over came from the legitimate use of the new ruling. Well, I think it did!
Both teams were evenly balanced, though the loss of a prop and the subsequent 2/3 of the game played uncontested probably cost them the win. Neither team seemed to control rucks well, which made them messy but competitive. I played rucks loosely which allowed a bit of niggle to develop, but this didn’t spill over, despite the home team’s combative Saffa No8. A word of warning to players if you have a distinctive accent; keep your thoughts to yourself, otherwise it makes it easy for the referee to pick you out and penalise you directly.
One of my season’s targets is to get a better grip of discipline and it was an early yellow card for the defender on the floor, 10m out, kicking the ball back as the scrummy was about to pick up. Black scored a crucial try from the resulting penalty
Final score was 22-22, my first draw, four tries from each team but some tricky kicks to convert.
My second match was supposed to be a third team game in south London, but the club had bumped the referees up a match as they had botched their referee appoints (very naughty boys). The home side just managed to scratch together 15 with a couple of subs, were as the visitors had 8-10 subs which the home side foolishly, it turns out, allowed them utilise. There was some good early pressure from the home pack, but the oppo had a wonderfully skilful and youthful back three who twice capitalised on some half chances to score. It was a marvellous chip and chase game that the home side could not counter. The home side converted some pressure into a score as chip through was knocked on by the defending full-back, not attempt to catch, 5m out, penalty try. I ran play through another phase to see if they could get a proper score but it wasn’t coming.
The scrums were tricky all afternoon as both front row wanted to mess about, as ever a tough one to decide who is up to what, there were a couple of obvious free kicks and penalties but an awful lot of resets.
Eventually the youth and fresh legs made a difference and the score began to flatter the visitors in what had been real contest. Final score 17-45.
Posted by Unknown at Wednesday, September 23, 2009 No comments:

Ahead of my second match of the season, the Referee Society brought out JP Doyle to talk us through refereeing the tackle at last night’s meeting. It is a huge benefit having Premiership referees in the Society to aid our development. He got us thinking about what type of tackle we were watching, offensive, gang, isolated, etc and how this might change our priorities for what subsequent offensives might occur. Is it likely to be a tackler not moving or a ball carrier not releasing?
His focus is clearly to avoid giving a penalty, the early whistle and a scrum being the preferred option. In judging if it should be a penalty, he clearly looks for the crime to be clear and obvious, something that will change depending on the observer’s reference point, particularly between player and referee. Next up, he looks to see if the play is positive, the tackler may be on the wrong side, but is making an effort to move away or is he prevented from rolling away?
Finally, the referee should use his judgement as to what is ‘fair’, is a player or side being rewarded for good, positive player and is the outcome equitable? This final point places the referee as an arbitrator (what the French call the man with a whistle) rather the enforcer as seen but the Anglo-Saxon world.
All good points to take into the weekend and I will try and watch some of JP’s game between Wasps and Worcester to see how he implements this approach.
Posted by Unknown at Friday, September 18, 2009 No comments: 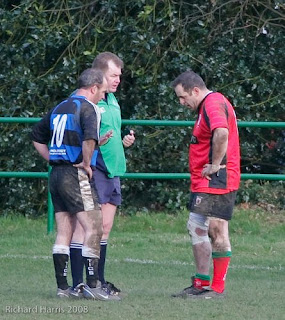 My kit is washed and my boots are buffed. The big boys have had a few friendlies, but the Premiership action starts this weekend and so will the action down in the lower reaches. I haven’t been assigned a game yet, but hopefully some last minute call will come on Friday evening.

Personal targets for this season are to get more games than last year. Fitness is up (though you wouldn’t tell from looking at me) and I am unlikely to suffer another catastrophic injury (touch wood). That said, getting my weight down and speed up would enhance my performance.

I was prompted at the end of last season and with a decent run of quality games getting to Level 10 at Christmas is achievable. It will rely on getting those assessment cards back to the bunker. I also want to get Assistant Referee qualified; it’s a way of getting involved in higher level games without the fitness or development issues that come with being 41.

There is going to be a tough learning curve for both players and referees with the new breakdown and obstruction/maul directives, so getting on top of those early and making it look like I’m in control are crucial. The last point goes for the whole game, never let it look like you’re unsure. Players are like wild animals, they can sense when you’re afraid and will use it their advantage.

Most importantly, I’ve got to carry on enjoying it.
Posted by Unknown at Thursday, September 03, 2009 2 comments: