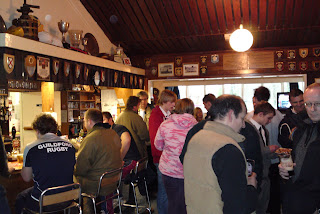 Out in the countryside for a colts game. A good, sturdy club house with plenty of memorabilia though the fire wasn't lit the welcome was warm; a bottle of sports drink was offered on arrival and a pint of London Pride was presented with little delay. There was even a Creme Egg for LondonRef Jnr.
Posted by Unknown at Monday, February 07, 2011 No comments: 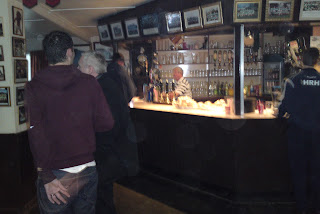 This week was a friendly, inner suburban club with a scruffy but much loved club house. It was one of the rare occasions where an alickado pops into the changing room post match and asks what I'd like to drink. A pint of London Pride duly appeared and there was no charge for the subsequent pint. The home captain made an effort to come and chat, shame the visitors didn't even make it to the club house.
Posted by Unknown at Sunday, February 06, 2011 No comments:

Fascinating! Between the posts and above the bar. Its a successful kick
Posted by Unknown at Friday, February 04, 2011 No comments: 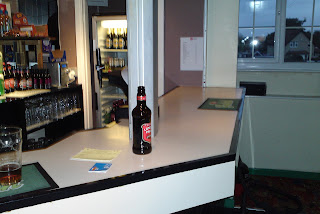 Another student bar and yet again I'm on own. I'm beginning to get a complex, the visitors had to catch their bus back but at least popped in for a take-away. The home captain popped up to pay expenses but didn't buy me a pint. Still, a nice bottle of Fuller's London Pride and a quick chat with the soccer ref.
Posted by Unknown at Thursday, February 03, 2011 No comments:

Email ThisBlogThis!Share to TwitterShare to FacebookShare to Pinterest
Labels: beer

Red steal the win, an omen for Friday?

An eventful afternoon with two University 2/3rd teams both showing great commitment and if moderate skill. Red scored first but yellow soon replied with three cracking tries. The scrum is looking like a key area of attrition. Yellow have a hugely strong Saffa loose head whilst red have a smaller but technically proficient Welsh tight head, with a high opinion of himself. The first quarter brings 3 scrummage penalties; driving up (yellow), driving in (red), standing up (red). After this they start getting the message, hopefully that they have a ref that has an idea what's going on. It wasn’t the end of the penalties but things settled. Truth is that the Saffa was single handedly destroying the oppo. I needed the “dominate, don’t destroy” chat at one point.

Towards the end of the first half, red score wide out. I'm standing close by for the conversion, about half way between touch and mid-field. As the kicker is running up I see that the touch judges haven't made it to the posts, so its going to be my call. My angle isn't good and the light is poor. Initially it looked to be going wide but the wind seemed to push it through, I am reasonably confident its a good kick and I give it. From the yellow players' reaction is immediately clear that it missed. I stand by my decision. The first half ends 19-14 to yellow.

Yellow score first in the second half, 26-14 but its a fair contest until the final quarter. A scrum on half way see red break and as I’m start running to follow them a body appears at my feet and my face hits the dirty. I struggle to blow my whistle to stop play but it seems red are crossing the line to score. I can’t give it and bring play back for a scrum. Red’s forwards are applying some good pressure and even score to bring it to 26-21. More pressure and yellow kill the ball 7m out; yellow card and No4 is out for the rest of the game. A red scrum 7m out sees the No8 break but he careers into me but keeps running, crosses the line and drops it, I’d called advantage for the bump so it comes back for the scrum which red score. 26-28 and we are into the last 5 minutes.

Yellow are now furious about the earlier conversion and I have some sympathy - I was probably wrong. My defence is that they needed to make more of an effort to provide touch judges. Despite this the feedback from both teams was positive and it was a game with some great rugby and plenty of enjoyment for all. I hope the 6 Nations has some matches with as much excitement…and Red stealing the win of course.

Posted by Unknown at Thursday, February 03, 2011 No comments: