Brutality in the Sun 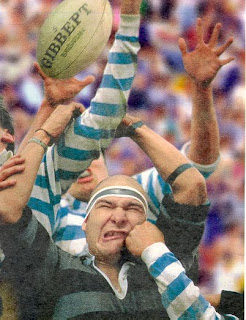 Its just about time for the end of season and one last outing at the Rugby Rocks London 10’s. A nice mix of social and vets with some good rugby on offer and the game mostly played with a super spirit. Unfortunately the heat boiled over in the mid-afternoon in a game I was due to ref but was swapped out of.
It was an Old Boys side verse a team mostly made up of players from my old club. I will stress I did not see what happened next but my description comes from discussions with the four refs that did. It seems an Old Boys elbow clocked someone, not for the first time. That provoked a fluffy of fists from both sides, who threw the first punch is unknown, who finished it was the Welsh boys. I arrived as two Old Boys were receiving treatment from the medics. One had a cut mouth and missing teeth and the other had a suspected fractured eye socket. Both were taken to hospital and discussion surrounded whether the police should be called and if the Welsh side should be thrown out of the competition.
The disappointing thing is that despite a ref and two assistants none of them saw enough of the action to identify the assailants. The best account came from the senior ref watching casually. So no one was red-carded as they should have been.
Only one player was clearly identified, the Welsh no8, a player I knew well from my playing days.  Sadly, it is a pattern of play that is all too familiar to me. Most weeks he was involved in some punch up, I remember one year he laid out the no8 from the same team in both fixtures. Apparently, he never started it, no, he is just protecting his mates but he always in the thick of it. The depressing thing is he is not some angry young man, he is in his mid-50’s. Learning to play rugby in the valleys in the 70’s this may be how the game was played. These days its not acceptable, its rare to see it at the top of the game and there is no reason basic thuggery should be acceptable lower down.
This character is a revered clubman; youth coach and past committee man: the only reason his ban for battering someone who provoked him in the club house was over turned.
When you play, or even a spectator and there is some hand-bags its a bit spicy, you may welcome the extra edge its brings to the game. However, as a ref you are responsible for player safety and seeing two players taken to hospital following what is common assault is something that need to stamped out.
The side in question wasn’t playing as a Welsh team, they were a mixed group, but they were wearing the club shirts. Its disappointing for me as a Welshman but from my experience with Welsh teams at the Schools Sevens there is pattern emerging that a basic level of violence is an acceptable part of the game.
No one will be arrested or banned for what happened, there won’t be enough clear cut evidence. The ref team slipped up on that one, a team of three should have got one of them but it was a social afternoon and no one was expecting this. It is clear that one pugilist should retire.
Update
The good news is that the two injured players were not as badly injured as first thought, indeed no teeth were missed and the eye injury was superficial.
Posted by Unknown at Friday, June 10, 2011 6 comments: