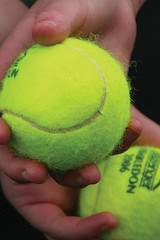 Its time to pack away the whistle, clean and dubbin the boots and look forward to enforced Saturday afternoons away from rugby.
There was an outside chance of game last weekend but nothing came of it, so that is it until August and the implementation of the ELVs. The Referee Society has a training day for us all and do expect some inconsistencies as we all get used to them in the first few weeks of the season.
An interesting comment was made that maybe the future is a franchise of 'Classic Rugby', the proper game played under the old rules. A world where ice baths and lucosade are banned and recovery is 8 pint session. A halcyon era were Wales are the best team in the world and a warm-up only occurred in the changing room after a match in January.
Blogging will be light in coming weeks as I head off to the tennis court.
Thanks to DeePoPcorn at Flickr
for the photo
Posted by Unknown at Monday, May 12, 2008 1 comment:

For many fans and players the 'trial' of the ELVs next season is a betrayal of the game they hold dear. Some of the of more contentious changes have been dropped, but the new laws fundamentally change the game we have played and watched from childhood. The reason is TV money and the driver is Murdoch TV. The powers that be need to understand the power of the consumer; that is us.
I propose that a mass demonstration to the ELV is staged on September 13th, 2008, the 1st or 2nd weekend of grass roots rugby that will be affected. I want, referees, players, spectators, volunteers at all levels to stay away in London, England, Wales, Scotland, Britain, France, Italy; where ever. We want to protect the game as we know it. It has always been a game that has common laws and values from the top to the very bottom. Let us show that is still the case. The money and the power of the IRB exists because we pay our dollar in match fees, tickets prices, Sky subscriptions, bar transactions, etc. Nobody plays, nobody refs, nobody attends a match, nobody watches Sky we all go down the pub and give a big V sign to the IRB and reclaim our game.
Are you with me. Forward this to those you think care.
Posted by Unknown at Thursday, May 01, 2008 2 comments:

The battle is lost!

A sad day for props

A partial victory with hands in ruck and offside at the tackle thrown out. The major problem comes from the Southern Hemisphere playing a very different game to the North.

The meaning of rugby

Battle for the soul of the oval ball game
Posted by Unknown at Thursday, May 01, 2008 No comments:

Threat to the very fabric of the nation

A fine take on the ELV push

A Very British Dude: Threat to the very fabric of the nation
Posted by Unknown at Thursday, May 01, 2008 No comments: