No refereeing this week, but Jnr has started rugby training. RugbyTots is a pre-mini training and learning programme I can recommend it. 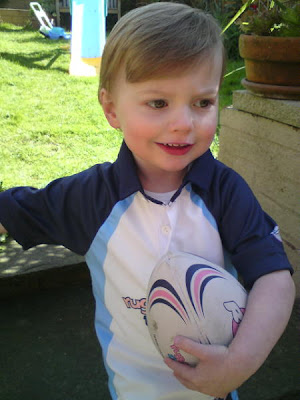 Discipline is a key part of the learning and quote of the day was "What do we call the man with a whistle? - Answer - SIR!!" Start 'em young!
Posted by Unknown at Monday, April 27, 2009 No comments:

Things are looking up for the Lions if the Boks are so unprepared that they had no idea about the worst kept secret in Northern Hemisphere rugby!

Lions Quote of the Day

Reen: Matthew Rhys in, Ryan Jones out, I am surprised at that

Another Girls game this week and an unfamiliar level of bonhomie. Sunday brought bright sunshine and an U18 youth game at Esher, I arrived wearing a London Welsh shirt, forgetting that a last minute try the day before had consigned the home side to the relegation zone of National One – Oh dear!
In adult male games, players may be vaguely familiar with each other but rarely do they acknowledge each other with anything other than a grunt or nod of the head. However, squeals of delight and giggling are not a something I generally see between teams pre-match, this did not continue as the match started.
This was another sharp and feisty contest with good skills from both sides; I was not surprised to see County representative shirts in the bar afterwards. Red started with a player down and, in fairness, Black dropped a player to the bench to even the match. Red put pressure on themselves early on with the back three unwilling to catch any balls on the full. They allowed the kick-off to bounce into in-goal, and from the resulting 22 drop out the home side score a try. The next kick off rolled into touch for a 5m defensive line-out. Both sides offered well organised defence, but Red could not compete with the physical size and power of the Black pack. That said, Black’s most potent player was the diminutive outside centre and captain. She was a speedy and agile counter runner who gave Black some of the best gain-line breaks. She was probably the best centre I’ve seen this season.
Scrummaging presented the biggest challenge early on, as with many youth game, a mis-match in size and skills saw a number of resets. Technique from Red was poor and they were underpowered compare to Black. Early in the second half the discussion was made for me when the Red hooker complained about neck pain and asked to take the scrum uncontested. This did cause me to adjust how I’d been playing advantage. Up until then, I was running scrum advantage differently for Red compare to Black. Clearly taking a scrum was a lesser advantage for Red than Black so they were more likely to play a couple more phases or receive a subsequent line-out.
In the second half the Red backs got a lot more ball from set piece and I noticed they too had a talented centre and some persistence scored an excellent try. The conversions was put over to the obvious surprise and delight of the kicker, she jumped and waved her arms as she ran back to the cheers of her team mates!
Ultimately the power of Black scored a final try and was the measure of the day. It was a good and fast game and I don’t remember seeing a group of players who were so obviously enjoying an afternoon of rugby.
Good points for me was positioning at rucks and mauls, I wasn’t in the way nearly as much as last time.
Bad points, scrum management; it is tricky to draw the line between coaching (good at this level) and getting players to do as they are told. Next, it was nearly chocking to death as I swallowed a fly. It’s difficult to stop the game when you can’t whistle!
Posted by Unknown at Monday, April 20, 2009 No comments:

Do us a favour?

Here in London, and I assume most other places, each referee gives out cards to the captains of the teams we officiate. The idea is that we are then scored on our performance and if there is a problem, or we are doing well, we can be independently assessed by the Society. Our grading are then changed up or down. The cards take 2 minutes to fill in and I even provide a stamp.
I try to get feed back from captains in the bar post-match but the card gives them a voice for what they aren’t prepared to say to my face. I hope they will be honest with both the card and over a beer.
There are a couple of problems, the first is the percentage that get posted back; this season only one match has seen both cards returned. I give up my afternoon to do something I enjoy, all it costs the team is my petrol money and beer or two and they get an afternoon of rugby. How much effort is it to fill in the form and post it back or hand it to me in the bar? Less time that it take the barman to pour the first round.
My second gripe is teams that have been on my wrong side all afternoon marking me down out of spite. They weren’t honest with themselves on the field, they can’t be honest with me on the cards. Having been around the circuit a couple of years, it is clear that one club in particular seems to consistently score me lower than my average. They are also a side that are ‘challenging’ to manage on the field. It’s a shame because the facilities and organisation are first rate, but clearly the ‘esprit de sport’ is flat, something you would hope wasn’t a function of the leading public school that feeds the club. LondonRef Jnr won’t be learning the game there despite the convenient location.
Posted by Unknown at Thursday, April 16, 2009 No comments:

This week it was to be a Sunday game for a change and a Ladies team for yet more variety. I arrived early, too early as I had mis-read the kick off time, so an extra half hour of ‘warm-up’. The last women’s game I reffed had utilised U19 scrummaging regulation (no turn-overs, no pushing past 1.5m) but things have moved on and this was full-on, by the Law Book, as it was national league.
The home side (Red) started the strongly with good field position, but an 70m interception from the fast and talented full back saw the visitors (Black) take the lead. The home side were better drilled and ruck presentation was excellent, but Black often seemed to fall on the wrong side at the tackle and penalties came thick and fast. I was certainly stuck as to whether it was deliberate or poor technique, the lack of yellow card means in my mind it was the former which may not be giving the girls credit! Red struck back with a well worked try before and another inception gave the visitors a 14-5 lead at half time.
The second half saw the game start to open up which suited the home side as their superior running structure started to gain momentum and the more organised forward platform got the upper hand against the more belligerent visitor pack. In the meantime, black’s full back once more caught the ball, this time on her goal line, thwarting a certain try, and took off down the field, whilst it would have been a sensational score, I was grateful she was pulled down short of the home side’s 22m and a penalty for the defensive players going off their feet was scant reward.
The best move of the match was saved for Red 13 as she took the ball 30m out and side-stepped the width of the field to score in the opposite corner. This put the home marginally ahead, with clock showing 38, but we still had another 16 mins to play, such was the injury toll. Red made it safe with 10 minutes of real time to go as Black’s shape began to break up. Final score 22-14
It was an impressive match, with solid commitment from both sides, scrummaging was committed though no less closed to indiscretions than the men’s game. I tried to stamp down on crooked feeds as there was less need to watch bindings and boring. I did get caught out by Red’s ability to change the point of attack, which resulted in my positioning being wrong and blocking the Black defence on the 10-12 channel, something to work on for next week. Recent weeks has seen a common problem of back chat but I please to say that neither team caused me a problem during this game.
So in the end, I put on a referee shirt and 30 women do as I say, I wonder if it will work the same magic is Mrs LondonRef?
Posted by Unknown at Wednesday, April 08, 2009 1 comment:

I have to say I would have done the same thing!

Ungentlemanly Conduct
Posted by Unknown at Monday, April 06, 2009 No comments: