As LondonRef moves up the grades he can claim something in common with the best refs in the world; refereeing my old side London Welsh Occies Vets. Wayne Barnes recently took charge of these fellas in a merit league match vs Ealing Vets on the playing fields of Richmond, dog-shit and all. Its a long way from the World Cup Final he is likely to take charge of next year (Safe money, England won’t be in it).

Chatting to my old muckers at the weekend they were clearly in awed by the experience; these players will only grudgingly acknowledge a  referee as being any good. To be truthfully at the level they have played in the past they would not be getting the best the game can offer. Like many Vets they contain players who have played at much high levels and been accorded referees as such. When you have seen what a National Panel referee can do and you now have a 40 year old never-going-to-be, you are going to be frustrated but that is the nature of the game.

The most fascinating aspect of their critique was the he only gave 4 penalties in the entire match. I think in my early encounters with LW Occies this was closer to 40. Have they suddenly got better, or did Wayne miss all that going off their feet and handling in rucks? I suspect it is neither. How did he handle the inevitable discussion about “didn’t you see that, every time sir?”

Barnesy gave an excellent talk to the Ref Society last year which he outlines how he approaches refereeing games. Using his judgement of materiality he looks to see if blowing his whistle is fair and equitable and I guess, does it increase the enjoyment of the game for all those involved. Making sure this runs smoothly requires good communication skills either in pulling players back from the brink of committing an offence or letting them know you saw it and why you didn’t blow.

I’ve tried to use a lot from that talk to improve my game this season and by my reports it seems to be working. It is also important to consider who he was reffing, a Vets merit match requires a different touch to my student cups games or a Tri-nations decider in Ellis Park.

There are two ironic outcomes from this, the first is some of the same players have regularly hurled abuse in the bar for Mr Barnes reffing Wales like he reffed the Occies, hopefully they will be  more understanding next time. The second is that, despite dominating the early part of the match, London Welsh ran out of steam at the end of the match and lost. The game was one of the fastest and most open they can remember. So some things never change, it was the ref’s fault they lost the match! 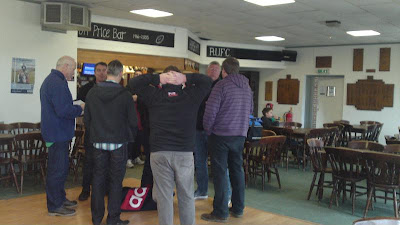 Friendly club out in the sticks, two local beers; Hepworths. Both teams stopped around and shared man of the match and dick of the day
Posted by Unknown at Monday, March 07, 2011 No comments: