With the media frenzy over Bloodgate, stories like this are being overlooked. South Africa have some of the top rated referees at the moment but this is another sorry tale of the increasing unfriendly behaviour they have to put up with.

You may remember the fan that assaulted the David McHugh in SA v NZ match a number of years ago and I even remember a recent story of a junior referee being threatened by a pistol-wielding fan. Perhaps the players themselves should set a better example to their fans?

All in all, it hasn't been a very edifying summer for our noble game
Posted by Unknown at Thursday, August 27, 2009 No comments: 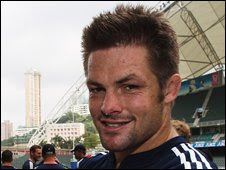 The new rugby season is getting ever closer, the elite are already involved in pre-season friendlies and for the rest of us its two weeks to go. It’s become a regular pre-season ritual to gather and hear what new law or directives have been issued for the new season. This is what I took away from the meeting and my understanding may well evolve during the season as I work with them and discuss with other refs.
Laws
Its been well flagged that a number of last season’s ELVs have passed into Law, the ones that did not make it were being able to legally pull down a maul (good), those Free Kick sanctions tried in SANZAR (good) and not bothering about numbers in the line-out (bad for refs). There has been some tweaking with the off-side at the scrum, with the defending scrum half now required to be besides the putting-in scrummy or behind the 5m off-side line. Once the ball is in, he can go were he likes as long as its on-side.
IRB Directives
These are generally instruction on how the law are to be interpreted and tighten up on what referees may varyingly judge to material. They generally move the game towards encouraging positive play and fair competition.
The big one this year is dealing with obstruction at the maul, anything other than the ball carrier being at the front as the maul forms will be obstruction. Lineout lifters must be careful how the maul forms when they land the jumper. Kick-offs catchers can’t rely on the binding onto a couple of loitering forwards in front of him. Once the ball is at the back of the maul, the ball carrier must lead the detachment and players must bind on behind him. Its all about fair contest for the ball, letting the oppo have a fair crack at stealing the ball.
The next directive involved the tackle and will generate lots of confusion. The first player arriving at the tackle will be given priority in playing the ball with his hands, even if the ruck forms around him. Last year, I would have cried “hands off, ruck!” now, as long as the player has arrived through the gate or was the tackler and is ON HIS FEET, he can handle the ball. This may come as a surprise to many players who have always played this way but finally the IRB are ‘legalising’ Richie McCaw’s game plan! What is import is intent; is that arriving playing looking to play the ball or just kill it? The latter still gets a penalty. The thoughts on this are this will improve the speed of service of the ball and will generate more space as teams will have to commit more bodies to rucks to win back the ball. In truth, at my level I doubt this will be clean enough to call but it should make a difference to what you scream at the TV.
One final thing, spear-tackles or any thing that involves lifting a player off his feet and dropping him down will be an automatic red card. Just like Rich Brown for the Aussies on Saturday who got, oh yes, a yellow card. Remember folk TV rugby is refereed very differently to your Saturday afternoon game.
Posted by Unknown at Tuesday, August 25, 2009 1 comment:

About time too, hopefully this will filter down to all levels.

Run out of Props? Tough Luck!

Too many sides, getting stuff in the scrum, have an injury and on comes another flankler
Update:
It looks like this has its roots in an IRB ruling and it is interesting to note the decline in uncontested scrums when this was trailed in France; from 145/994 to 2/994!
More details here
Posted by Unknown at Wednesday, August 19, 2009 No comments:

1. To be fair, there is rarely a partisan crowd to sway my opinion

2. Sorry if I call forward, it was or I just need a breather

3. Certainly explains why England are trying to play in red


3 Smart Things About Referees
Posted by Unknown at Thursday, August 13, 2009 No comments:

In the Middle: Be warned... bad joke alert
Posted by Unknown at Friday, August 07, 2009 No comments: