As I work for the Canadians, this is very funny

It is an exciting prospect of having the RWC locally in 2015, but this blog is supporting the competition going to Japan. My return to playing rugby in the '90s was with London Japanese (I was working for an Japanese stockbroker at the time)and I can assure you that the Japanese love their rugby. A more committed, if underpowered, set of players I have yet to met.
Neither should should we think of rugby as a marginal sport in Japan, it is huge, look at these registered player numbers from the IRB website

Read a mobile friendly version of this site at

http://londonref.mofuse.mobi/
Posted by Unknown at Friday, May 15, 2009 No comments:

The great experient is over. The Lions and 3N will play under the new laws. No maul pull-down, no free kick instead of penalties. Sanity restored. O'Neil Pissed off
IRB Council approves ELV recommendations
Posted by Unknown at Thursday, May 14, 2009 No comments:

Forgive the scrum-half, he's from Zaragoza 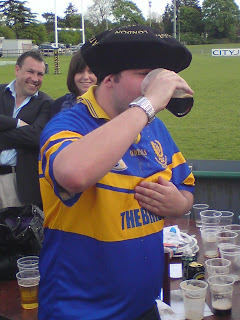 As the season draws to a close, I was rewarded with the best game of the year. I was drafted in to a hastily arranged game involving some Spanish tourists (Blue) and a local Exiles (Green) team. Arriving at the ground I was surprised to see a large crowd assembling but was relieved to learn that at National League game was being hosted and the crowd wasn't for my match.

Both sided were thrown together, the home side from a mix of youth, 1-3 teams and vets, the visitors were a range of ages from the university alumni. My pre-match worry was communication with the visitors, but there was a good understanding of English. Any concerns about a mis-match of skill was soon dismissed as the visitors took the game to the home side with some robust forward play and very swift back play. The Spanish soon got the first try and it took some time for the home side to reply. Soon after, Green killed the ball on their own goal line, despite having a clear sight of the miscreant, in the spirit of a friendly I didn't yellow card him. Spanish scored a good try from the penalty and soon after we turned around 10-5. It is fair to say the pace of the game was blistering, especially in weather better suited to the Spanish! I felt a twinge of ham-string pain but some ice carried me through.

The second half saw a slew of replacements for the home side, with youth replacing experience. The extra pace saw them gain an edge, but the penalty count mounted as Green frustration with the score line began to tell. The Home side were well matched against the Spanish, but their edge was the scrum, but I become frustrated as both sides drew sanctions for front row offensives. Green eventually scored and converted to take the lead. Soon after Blue were again pressing on the Green line and two Green hands killed off any quick ball, this time I went for yellow and Blue made the extra man count to score and regain the lead. The match still had time to go and Green's young, heavy forwards pressed hard to secure another try, again converted. The game moved into the closing minutes, with Blue pressing hard, until my watch beeped for full time just a Blue conceded a penalty under Green's post, a kick for touch to end the game? No one asked, a quick kick up field and Blue were running back into Green's 22, a cruel twist of fate would see a forward pass deny them the winning score. Final score 19-15 to Green.

It ended there, a great game to be part of, easily the most talented players I have refereed, it was a full-on encounter played in a great spirit despite the yellow card. It was remarkable how much easier the breakdown was to control without old/tired/lazy/poor players falling over the ball, this enabled quick clear decision making on my behalf. Afterwards, the rugby community was shown in its best light as gifts were exchanged and Guinness shared. I am not sure how much wear the Home side man of the match will get from his Basque beret??

I think it should have gone to Japan too, but British Dude has a, erm, more detailed analysis of the issues....
Rugby world cup bid
Best not to read if you are a sensitive Kiwi type.
Posted by Unknown at Thursday, May 07, 2009 3 comments:

Play Acting
A couple of articles caught my eye in The Rugby Paper this weekend (no link as they don't publish online) both were by Nick Cain. In the first he makes the point about gamesmanship and in the second he questions the reffing appointment for the Lions tour.
Gamesmanship will always be part of rugby, it is part of getting an edge against your opponent, physical, skill, stamina they are all as valid as a sly comment or witty slight. But Mr Cains is right “the stuff that is creeping in now needs to be slammed back in its box by referees...there is an epidemic of ruffling of hair, patting the head, or applauding an opponent who has been penalised”. The man is right, I would also add some of the more jubilant try celebrations too, hugging and kissing is for the girl friend or soccer players. A manly tap on the shoulder or shorts was more than enough for some of the greats of the game and so it should remain.
A couple of years ago in a junior 7s match at the talented No10 ran in his 4th try he made some comment to rub in the humiliation of the score. I awarded the try but restarted with a penalty. Hopefully that lesson will stick with him.
The Lions tests this year will see neutral IRB referees, with NZ, Australia and France providing the referees and the provisional referees being both British and South African. Mr Cains is concerned on two fronts, firstly the ability of the Aus and NZ referees to allow the Lions to scrummage, an area they should have an edge. Here I too am slightly worried, Stuart Dickinson during the Autumn tests failed to get to grips with England's scrummage nonsense and that day did a convincing display of being outfoxed by both front rows. That is as polite a description of his performance as I am prepared to make!
The second point is that during the last SA and NZ tours, some of the provincial games have taken a high physical toll on the star Lions' players, leaving the test side depleted and vulnerable. I don't see that happening this time. Firstly, all the referees are IRB panel referees, at the top of their game and secondly the 'home' referees include some of the best of the IRB panel Lawrence, Kaplan and Joubert. In fact, its shame the Lions insisted on neutral Test referees.
Posted by Unknown at Wednesday, May 06, 2009 No comments:

It is unlikely to ever get tested, but I would hope the same would apply to a professional player.
Posted by Unknown at Friday, May 01, 2009 No comments: