IRB Player of the Year

Hardly surprising since they changed the game to accomodate him. 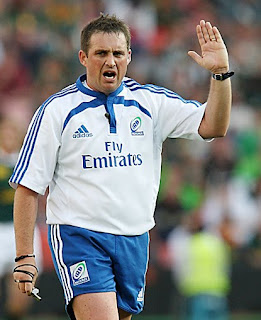 Last night the Society hosted three of the iRB panel referees, Wayne Barnes, Stu Dickinson (or Dicko, aparently) and Bryce Lawerence. There was an informanal Q&A session and some predicable ribbing about Cueto's non-try in RWC07 (Dicko was the TMO) and the scrum in the 1st Lions Test (Bryce was the Ref).
The most interesting point to come out of it came when the three were asked about crooked feeds at scrums. Barnes said that if every other safety-related issue was in hand, then he would look for crooked feeds. Bryce agreed but astonishingly, admitted that prior to the ANZ Cup season the referees agreed between themselves not to referee feeds.
Bryce showed some humour when asked how he thought England would play he said that he'd been reading the English press and Jonny was going to win it for them and if he didn't it would Bryce's fault. Perceptive man. Our session last night also included a scrumaging presentation, so I hope that helped.
The three were also asked what rule changes they would like to see.
Dicko said he would like to see no points for a drop goal
Bryce said he would like collapsing the maul back
and Barnes said he would like referee replacements!
.
Posted by Unknown at Friday, November 06, 2009 No comments:

For most of us rugby and India only mixed at 10.30 on a Saturday night after 10 pints but a recent Society meeting saw a couple of referees from the subcontinent talk to us on the Game in their part of the world. The London Society has undertaken an exchange with India as part of the generous sponsorship from Standard Chartered Bank. I was surprised to hear that two of the oldest clubs in world rugby are Bombay Gymkhana and Calcutta (of the Cup fame). Despite Britain’s long residence in the country the locals failed to take up the game to the same degree as the rest of the colonies; preferring, to whoop us at cricket instead.
These days, the iRB are leading the development of the game and the Commonwealth Games in Delhi in 2011 is proving some development focus as well as much needed pitches. There are only two pitches in the country during the monsoon season! Since 2001 players numbers in Indian have risen from 1,500 to over 17,000 as development of the game has focused on armed forces and the police as well as youth.
http://rugbyindia.in/
Referee development is more difficult, there are very few in the country and they suffer from having on a small number of games, typically 4-5 per year. Then there are distances involved with limited expenses to cover travel and with only one assessor to cover the entire country getting help for improvement is a slow process. The two referees who came to London were found 4 games each, both youth and senior and were assessed at each. There thoughts are that with adequate support from Standard Chartered this type of exchange can continue in Indian and other developing rugby nations.
A final story, the corresponding London referee who visited India was given a match between Uzbekistan and the Bombay Police. It was all going well with the large crowd enjoying the game. Unfortunately a high tackle by the Uzbeks provoke ire amongst the crowd and 150 plastic chair welding spectators invaded the pitch and began attacking players and each other!
.
Posted by Unknown at Friday, November 06, 2009 No comments: