The South Africans seem to give their referees a high public profile as the website shows. The story below will now serve as inspiration for my use of yellow cards this season, especially if I encounter my old club team !

The Legend of Dick Jefferys

"The teams were lined up to run on but were waiting for one latecomer to arrive. Dick Jefferys blew a tetchy blast on his whistle and shouted at the tardy one to ‘buck up there'. The latecomer took exception to this and gave Dick a two-fingered sign, with vocal accompaniment, whereupon Dick waved him back to the changing room, hustled the teams on to the field, awarded a penalty on the centre spot to the non-offending (he would have said ‘non-offensive') team, advanced the penalty ten metres on receipt of the inevitable objections and signalled three points virtually before the match had begun. Now that took some doing!"
A lesson to all of you who may be a little too chippy! 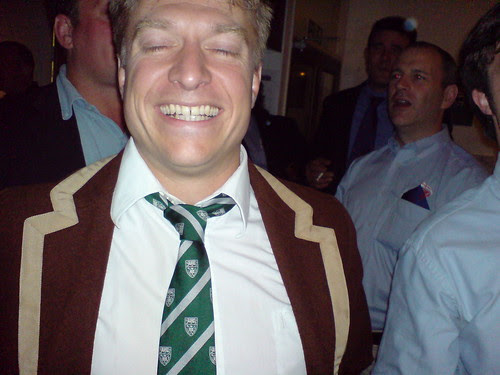 When the IRB announced that the Sanction ELV would not only be tried in a single competition, it signalled some hope.
Europe puts IRB 'no penalties' rule into deep freeze - The Independent
If this turns out to be true (there is no word on the IRB website) then the most controverisal aspect of the ELV are dead in the water. The word from New Zealand is that players and referees are having trouble with the phyiscal requirement of playing a faster game. Furthermore, I can not see how the IRB could sanction a split in the Laws on geographic lines, given the consequences of the last time this happened.
So let is raise a glass to the "57 Old Farts" of the RFU for saving our game.
Posted by Unknown at Tuesday, August 19, 2008 1 comment:

The official answer is that referees are there to referee the game according to the Laws stipulated by the RFU. No debate.
Posted by Unknown at Tuesday, August 12, 2008 No comments: Last night the great and good of the London South West referee region gathered to be ELV’d. The official line is ours is not to question why and we will get on and apply the laws in games. The general view is that aside from the maul pull down, there is no dispute with the ELV as being applied in the Northern Hemisphere. Efforts to speed up the game, such as the quick throw-in were only unwelcome for the extra physical effort needed to control them.
The broader issue of the Sanction ELV (pure evil and the Aussie RL Trojan Horse) wasn’t discussed but I did get the feeling from the RFU officials that HQ is dead-set against these coming into law. Comment from the RFU referee development officer suggested that ‘speeded-up’ game in SANZAR is such that even with 7 replacements, players are suffering serious weight loss and even elite referees are having trouble keeping up with the pace of the game. God help the rest of us!

Notes on the individual Laws; I am assuming readers are broadly familiar with the northern hemisphere ELVs

For high level games this will continue as it has been for a number of seasons were TJs have always assisted. This does not mean that the reserve for the Extra-Bs will be doing anything other than marking touch. The referee remains the sole arbiter of Law.

There will be a clear distinction;
Pulling down a maul – Legal
Collapsing a Maul – Penalty
Players can bring a player down by pulling between the shoulders and waist, but not the collar. Players on the ground can not pull down a maul this will be a penalty. Any action involving taking out a opposing players legs is illegal.
As the maul goes to ground, Referees will encourage the ball to be used; otherwise sides will risk a turn-over

The ball can not be played into the 22 and kicked directly into touch and ground gained. If it bounces 1m in field and then out that is fine. If there is a tackle, ruck, maul or it is touched by any opposition player then ground can be gained just like last season.
If centre of a scrum is outside the 22 and ball comes out inside the 22 then that is played backed.
With line outs, it is all about the middle line, a steal on the 22 is not played back, so kicks directly to touch are OK.

These can go in any direction, but must cross the 5m as last year. There is no off-side, so the non-throwing side can position themselves anywhere behind the point of touch and 5m in to challenge a receiver of the ball. Usually requirements for a quick throw remain; it must be the same ball and must not touch a non-player. There will be greater focus on the speed of ball release from players tackled into touch. There will be an assumption that the quick throw in on, and that this should not be prevented, sanction will be a penalty 15m in.

Minimum of two players and maximum of 13 in the line; there must be a receiver.
The non-throwing side must have a ‘hooker’ in the 5m channel and they must stand at least 2m from the 5m line.

Off-side for numbers 10-15 is 5m back from the hind-most foot of the scrum. At a scrum 5m from the goal line, the goal line remains the off-side line, even if the scrum moves towards it. It was felt that the extra space gives the attacking back-row a large advantage at this range and Referees will be watching for wheels and may reset more often to discourage this.
The scrum half’s off-side line remains the ball, but defending halfs can not drift across more than a meter. If they go around the opposite side to the put-in, then they can not move past the flanker, should they retreat back across the 5m, they can not return.
It’s not an ELV, put an IRB directive on No8 will be enforcing the full bind. They must be fully bound as the rest of the scrum engages and can’t ‘rock in’ to an engagement. Last season this would be not bound penalty, now it is an off-side penalty (not bound- not part of the scrum, inside the 5m)

These are no longer in touch, unless the ball is grounded against them. Defenders will need to switch on, if the ball hit the post and bounces into in-goal, the ball is live and it is not automatically a 22 drop-out. Similarly, hitting the post and going into touch is now 5m line-out.

I still expect mayhem on the few weeks of the season, most referees expect to be contructively coaching sides, but don't expect a pre-match lecture; they will expect you to know the Laws.

During the World Cup, the Argies (Wales' own colony) and the Georgians demonstrated the power and skill that good mauling can bring. Damn entertaining too, unless you are a Fosters-Soaked Aussie 'Sports' fan that seem to be setting the agenda for rugby union "development".

Having watched the first half of the match the Argies seemed to be competing well with the Boks but with their most devastating weapon neutered, they were never going to win a running game against the power Boks back line.

Having so long denied the Argies a place at the top table, the IRB have unwittingly taken away their favourite toys. Now let us think which other international team uses the rolling maul to devastating effect to bully the oppo?

British Dude highlights a excellent and worthy cause. I would love to go to the match and might still do so. However, I expect to be refereeing that afternoon. I will donate my expenses for the day and bit more to the cause. It would be good if teams all around the country upped their match fee a couple of quid and donated that to the cause and sacrificed a couple of pints for those that have sacrificed a lot more.

Help for Heroes
Posted by Unknown at Thursday, August 07, 2008 No comments: