An then there was one

A confusing and ultimately disappointing weekend. I was supposed to have two games, a local Surrey League game on Saturday and a U15 game on Sunday. Firstly the Sunday match was changed to U13; younger and lower skills. Secondly my Saturday match was scratched, a second game was offered local to me, but before they could confirm I’m called for another league game. I’m finally called 2 hours before kick off to learn that this match is cancelled. It’s all too late to get another match, which is disappointing given the overall shortage of referees.

Still, I managed to get to watch my old side, London Welsh Occies, hammer London Scottish in the semi-final of the Middlesex Merit competition. There are some photos here;
London Welsh Occies
I had a good chat, post-match, with the Level 8 referee who managed the game, with some interesting pointers on how he interpreted foot-up in the scrum; not something that gets pinged very often.

Sunday in Richmond park with Rosslyn Park and Dorking youth was a one sided affair, with a superb performance from the Dorking fly-half. A star of the future, he popped up everywhere, taking two of the four tries and kicking three conversions. I had a good chat with the Park coach and it included the ELVs, our shared view was that collapsing mauls and hands in rucks my well work at the top of the game, but it is asking for trouble on a wet January afternoon with lower level teams.
Posted by Unknown at Monday, March 31, 2008 1 comment:

Many would argue that this has been the Aussie agenda for the senior code for a number of years.

Ruck off, you nancy Aussies

A superb take on the ELVs from the man himself.

Not Refereeing this week!!

IMG_8663-51
Originally uploaded by gideon_jones1
I wasn't going to miss this on the telly
Posted by Unknown at Monday, March 17, 2008 No comments:

I opted out of refereeing at the weekend as the pub beckoned to watch Wales chase a Triple Crown and I needed to keep some energy for all day Monday at the National Schools Sevens at Rosslyn Park. It is the largest rugby tournament in the World with games played over 4 days on 12 pitches. Most of the top rugby playing schools from the UK participate, as well as invitation teams from Spain, Nigeria and Eastern Europe.
http://www.ns7.co.uk/
I have volunteered to referee for the past 4 years and I recommend it to any refs who can spare the time. Each year they contrive to find the worst weather available in March. Usually is it a bit of cloud or some wind. This year ‘the worst storm of the winter’ stuck. The force 9 gale was blowing down the pitch, blasting icy rain into my face, whilst branches fell from trees around us. The pitches began to resemble swimming pools as the lightening. Not a great day to christen my new Mizuno boots!
As I approached what was to be my final match (the afternoon’s play was abandoned) I commented to a teacher that they could force their little charges to run around in shorts but why had I volunteered!
As the two 13 year captains approached, one dress in a maroon shirt with brown stripes and the other in maroon with mustard stripes, I informed them that as they shirts where so similar we would first toss a coin to see who would play in skins! The look of horror on their little faces brightened my day.
Maroon and brown turned around 21-0 and the opposition coach asked to make a quick 5 minutes for the second half. I was happy to oblige, I have never played or refereed in worse weather.
Posted by Unknown at Tuesday, March 11, 2008

My Canterbury boots finally gave up the ghost last weekend, it’s just my luck it should happen on the rare occasion I have two matches. They were very comfortable boots and I’m sorry to see them go. Being size 12 always presents problems buying boots, it’s easy to track them down on line but I want to try before I buy. Rugby Scene had a reasonable selection, but fully retail price is unattractive.

http://www.lovell-rugby.co.uk/ managed to get me some Mizuno Wave Samurai, very shift delivery and 30% less than Rugby Scene – Bargain! (Londonrugbyref has no commercial interest in lovell-rugby, just happy to recommend good service)
Posted by Unknown at Tuesday, March 11, 2008

You've been a very naughty boy 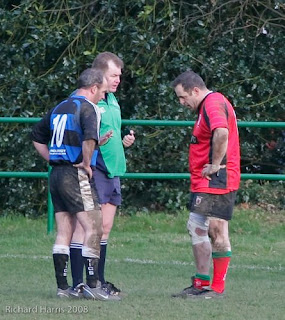 It was to be two games this weekend, a Surrey 4 league match for Saturday and U16 game for the Sunday.

A crisp and clear afternoon in Egham with the home team up against Wandsworthians and what looked like a very square pitch, plenty of width, anyway. Being ushered into the home-side’s changing room because there is no referee room is always disappointing. It’s comfortable having somewhere to escape to reflect on the match, especially if you have a tough match. Still, they were a friendly bunch and there was plenty of excitement about a tour to Hong Kong, Australia, NZ and LA; it sounded a good one.

Reflection from recent matches meant I wanted to focus on avoiding back-chat and a Society tutoring session from Wayne Barnes on the misdemeanours of the tackler were the key areas to think about. Part one was soon challenged by the Wandsworth South Africans, but a couple of sharp warnings saw pitch comment down to an acceptable level. I read over on rugbyrefereeblog that there is recruitment problem for SA refs, it is hardly surprising given the chippiness of your average SA player over here.

The game progress well with Egham enjoying good possession and territory but a couple of neat interception tries giving the visitors a comfortable margin. The rucks were a little loose and the Wandsworth back row took advantage, coming in at the side. The chippy SA openside eventual caught my attention at a defensive scrum 5m out. I called him back as he detached and then, as the scrum wheeled, he burst around the back and pounced the ball. The look of bewilderment as I showed him yellow was a picture, I later explained that there were one of three penalties from his actions and he could pick any one for his card given the general warning I had already issued

The home team took advantage of the extra man to add two tries to bring some balance to the scores.

I learned at half time that I was being officially assessed; I was confident with my first half display and continued that into the second. It has been two years since my last assessor visit so it was great to get some objective feedback. Generally, I did well; good positioning but a few too many penalties, stop these with an earlier whistle at scruffy rucks. Furthermore, I need to work on my pitch authority (I’ve been working on this but clearly more to do) and I need to improve my speed off the mark (fewer pies)! He was impressed enough to recommend an upgrade, so there something to look forward to.
Posted by Unknown at Monday, March 03, 2008

I thought I would share this exchange on my old Team's message board. They were unhappy with their ref at the weekend. I can't comment on his overall performance but I think here, he has made the right call.

Our whingeing wound him up and made him emotional (he had fear in his eyes) and decisions started to go against us. I particularly enjoyed the penalty he gave against us when Ga (correctly) called their line out not straight - "I was going to give you the scrum ...".

If you persistently chat back, commentate, question decisions then you run the risk of a penalty. Even if the throw wasn't straight and the ref was going to give it, telling him it wasn't straight is going to be seen by all refs as questioning his decision, which is a penalty. It won't happen the first time or possibility the second but it is going to happen eventually.


We had plenty of chats and he told me he was looking for an excuse to card Clem (because Clem was whingeing). His excuse came in the 38th minute when Clem hit the guy who had just headbutted him.


Now I would never comment as such to a player, but any player who consistently whinging at you as ref is not going to be your best friend. Its the same as above. "he's off-side,ref"," forward pass ref?" If the ref didn't blow, it wasn't, by asking those questions you're questioning his decision. Penalty.
Clem was using up his credit and when it comes to a 50-50 of card or not, there is nothing in the credit column. Headbutt or not, you are going to get a card for throwing a punch. Its straight forward retaliation, refs rarely see the first offence but its much more likely they will see the consequence.

Most refs are out to enjoy his afternoon too, do engage in banter but when it comes to the decision process. Keep your mouths shut!
Posted by Unknown at Monday, March 03, 2008