The Laws, they are a changing?

Just when you thought it was safe to look at the Law Book
Points experiment in Varsity Cup - SuperSport - Rugby
Posted by Unknown at Friday, November 18, 2011 No comments:

Its not just sportsmen that are using sports psychologists, last night the Society had a presentation by Dr Raj Persaud on the psychology of officiating. It was an entraining and informative meeting but sadly Dr Raj didn't know enough about rugby to make it truly relevant to his audience.

The most interesting to thing to come out of it was the concept that motivation drives perception, what we see will differ from others because our motivations are different. He illustrated this with a experiment with basketball players and a gorilla. By setting a skewed pre-condition he was able to demonstrate that many of us would miss the gorilla.

He was able to show us that we do see a different game to players, coaches and spectators because are motivation is to create a fair and safe game, whilst the other stakeholders are looking for something different, a win at all costs. When a player asks me' "did you see that ref?", I know that I didn't see the gorilla. Clearly, as referees, we need to keep as broad a focus as possible but we will never see the game in the same way players.

There were some other pointers to help us, the most important be the power of positive focus, when you need to do something well, concentrate on why it will go well rather than worrying what can go wrong. When you make a decision that may have been wrong don't dwell on it, reset the counter, focus on getting the next and every other decision right, each one is a independent event.

A behind the scenes look on match day..

Posted by Unknown at Wednesday, November 16, 2011 No comments: 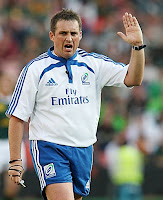 ..this story had any baring on the decision made in this one
Posted by Unknown at Wednesday, November 16, 2011 No comments:

Things that go Bump in the Afternoon

Rugby is a rough game and long may it stay so, but last Saturday I ended up abandoning my first game.

I took charge of what should have been a hotly contested Surrey merit match. The game had been played at a moderate pace and with a good spirit, in dry and unseasonably warm condition, cloud cover was think and consequently the light was poor. The Home side had raced to a 34-12 lead by the start of the second half, when the Visitors won good ball from a penalty line out on the home 22. They moved the ball to the middle of the field and the centre took the ball at pace on the 22m line, he was tackled by his opposite number and dropped very quickly. The tackle was hard and there was quite a collision but it looked fair.

It was clear, post-tackle, that the Blue player wasn’t coming around never mind getting up. I immediately stopped play and two Blue members ran on to the field to help their team mate, the one who took charge I later learned was a fire fighter and looked to know how to care for the injured player. The fire fighter removed the player’s gum-shield and there looked to be a great deal of blood in the mouth/nose area and the player was choking as a consequence. An ambulance was quickly called and after 3-5 minutes the player look to be regaining consciousness. The ambulance arrived around 10-15 minutes later and eventually the player was judged fit enough to walk into the ambulance and was taken to hospital.

A number of the Visitors and spectators were agitated after the tackle as they felt the tackler hadn’t used his arms, I don’t have a clear recollection on whether his arms were correctly deployed but my first instinct was that it was a hard but fair tackle. The tackler sustained a nasty blow to the head but walked away. I suspect that heads clashed before the arms where fully raised.

The light was fading and within the hour it would be too dark to play safely. I spoke to the captains about continuing the game on the adjacent pitch before the ambulance arrived, around 15 minutes after I stopped the game. Both captains agreed that whilst this was possible the concern for the injured player and bad-tempered fallout from the circumstances of the injury meant that the game should be abandoned.

I haven't heard if there was any on-going problems, hopefully the injury isn't as life changing as this one. I am sure that the happy outcome of the day's events was in good part due to the prompt action by the para-medic fireman. It does worry me how many games, even in the leagues, that have absolutely no medical coverage, maybe the RFU should spending more time addressing this than Mike Tindall's nocturnal adventures.
Posted by Unknown at Wednesday, November 16, 2011 No comments:

I'm getting back in to swing of things following ankle problems, man flu and Irish weddings. This week saw a last minute appointment to a medical student match verses the 1st team of the team I reffed last week. I can't be sure of the level but the appointments manager suggested it was a little higher than appropriate but the promise of an assessor would fix that. My comeback almost ended in the first half as my thigh took the full force of legs swinging through the tackle. I dropped like a stone but the expert medical attention concluded it was a dead leg and I was able to run it off. It must have been serious, I wasn't able to think to blow my whistle to stop things!

Doing first teams helps with simple things, everyone is playing in position, the bench is full and they know the replacement regulations. My pre-match assessment suggested that the visitors would be bossing things, with a much bigger pack, however the medics started very strongly, driving two line-outs +10m to score twice in the opening 15mins. The were getting some fast ball and moving it wide quickly only for some very obvious forward passes to ruin things. As the first half progressed, the medics lost a lock and a big centre and started to loose moment as possession dwindled. They turned around 12-7 to the good but two tries early in the second half saw the visitors take control, their scrum was now dominant and the medics were struggling with first phase possession. The home side's centre managed to catch a couple of interceptions but not with enough space to do anything with them, typically getting isolated. The medics took another try to bring them in touching distance with 10mins to go but a penalty and then a try sealed it for the visitors.

There had been some minor niggle and I had penalised the visitors captain when he took umbridge at a perfectly good gang tackle. At the final whistle there was 6-8 man punch up as things boiled over, I was 30m from the action with the ball, so I didn't get a good view of who was responsible. There was a least one split lip and it looked spirited.

My report cards were pretty good but both marked me down on one feature. The home side thought I handled mauls badly, why I asked. It amounted to one incident. Black is caught with the ball and maul forms around him, black are driving forward with some gusto, but there is a yellow player, literally suspended in the middle trying to rip the ball and/or pull down the maul. The ball wasn't going to appear, black are clearly going forward  but we are not going to see the ball soon. Lets get restarted with a scrum to black, seems a fair and equitable thing to me, but on that one piece of evidence I'm poor at managing mauls. They seemed happy when I allowed them to rolling two 10m to score.

The other side criticised  my control of open play, why? I missed a knock on, 20m further on I saw a knock on but this was against them. Sorry, but if your prop wasn't so slow and fat he might have got out of the way and not obscured my view.

Despite my less-than-obvious failings I am happy with the how the game ran, its always disappointing if there is a punch up and with less well brought lads than the medics it would have boiled over earlier. However, if a team goes out looking for it trouble will eventually arrive and its up to me to deal with it when it does.
Posted by Unknown at Friday, November 11, 2011 No comments:

My host's home ground having been swindled away by Chelsea (apparently) are tenants at this larger league club. Grotty changing rooms but a modern, welcoming bar, an OK pint of London Pride and an excellent lasagne.
Posted by Unknown at Friday, November 11, 2011 No comments:

The best facilities on the circuit, the students even bought me not one but two pints of TEA. Sadly the real ale selection has dropped from six beers to only three
Posted by Unknown at Friday, November 11, 2011 No comments:

More on that Tackle

Much will continue to be said about Warburton red but you have to split the argument in to two parts.

a) Referee were instructed to red card tackles were the players legs are lifted above the horizontal and the player driven or dropped to the ground so that the head/shoulders make contact first.
b) Do players/coaches/spectators/referees things this is acceptable behaviour on the field and what should the sanction be?

Analysis
a) The Warburton tackle ticked all the boxes for that to be a red in the eyes of the referee. The way a referee will judge at a tip tackle is start with a red and work back. Dropping because he realised it was a tip is not a defence. Making some effort to control the player coming to ground is, and that is what Stephen Jones looks to do. Players cannot always control the outcome of where a players body goes in a tackle, but they must try to tackle in a manner which is safe and when it goes wrong control the tackled player to minimise injury.
The video images of Stephen Jones tackle are pretty poor, the referee is just about right given he is judging it in real time without slo-mo replays.


b) A bit of rough and tumble is all very good until someone gets turn, its a valid for grown ups as it was in the school yard. The referee is ultimately responsible for player safety and there must be a suitable sanction to dissuade players from dangerous play. The negative consequences of this are there for us all to see in that semi-final. If you are going to take away red cards for this then what else and how are you going to protect referees that are not able to punish it adequately? Saying that dumps are different to spears brings in more subjectivity that opens up the ref to further criticism. The focus, presently, is what is dangerous? Landing on your head/neck from a height is. How do we discourage it? Red card.

For anyone who thinks it isn't dangerous, please read this.
http://www.thestar.com/news/gta/article/641866
Posted by Unknown at Wednesday, November 09, 2011 No comments: