How to avoid a tip tackle

The momentum of going into a tackle can result into a players legs going somewhere you don't expect them, this can become a 'tip tackle'. Wales' Sam Warbuton fell foul of this in the most talked about tackle at the weekend. Here we see Gavin Henson tackling Tait, the England player's legs are lifted and if Henson drives through or drops him he would be red card today. Henson has the strength to control the player and bring him to ground safely. Humiliating Matt Tait in the process.


Another example of Mr Rolland's judgement on tip tackling, more of a 'traditional' spear tackle but the man is consistent.

The question must be how many of this delightful compilation you would not red card?

That tackle and the Red Card

As a referee, London Welsh wasn’t a happy place to be last Saturday, well most Saturdays actually. There can be no better place to watch a Wales international short of the the Millennium Stadium itself but as I saw the circumstances of the Warburton tackle I realised I would be justifying the action the referee for the rest of the day. My conversation with the Welsh RFU panel touch judge for the home game was the one exception.

My first instinct on seeing the replay was “oh dear, he is going to get cited and banned for the Final”, a yellow card was inevitable. It was a surprise that Rolland issued the red, not from the action of Warburton but on what referees typically do under such circumstances. A yellow and a retrospective ban is the form and is something we have seen 3-4 times in the RWC, but I’ve seen an Aussie red carded in 3N match for the same thing. The argument of consistency has been made and is a valid one but needs to be applied to the action of the other referees in the tournament. The resultant bans for player show that red cards should have issued at the time.

The IRB in their infinite wisdom has decided that the ‘tip tackle’ is supremely dangerous. It is covered by this;
Law 10.4(j) reads: Lifting a player from the ground and dropping or driving that player into the ground whilst that player’s feet are still off the ground such that the player’s head and/or upper body come into contact with the ground is dangerous play

The upshot is that if you take the player up, you bring him down safely; you do not drive him down (the extreme Melamu/O’Driscoll example), you do not think, “bugger I’ve tipped him I better let go of him now” (as Warbuton did) but you control how you bring him down (as Henson did to Matt Tait in 2005). Intent does not come into it, terrible things happen by accident and we must take the consequences.
What differentiates the referee’s actions on Saturday was he didn’t bottle the decision, he saw what he saw and knew how the IRB had directed him to act and he went to his pocket. The only mistake he made was not consulting his assistant referees, I doubt the outcome would be different but it would have bought himself time to make it clear in his mind and shared the responsibility for call.
Imagine a conversation like this.

REF, “this is what I saw, red 7 lifts blue of the ground and through the horizontal and drops him, he fails to bring him to ground in a safe manner, a dangerous tackle. Do you have anything to add?”
AR1 “nothing to add, it was a dangerous tackle,”
REF, “I am going to award a penalty and issue a red card to red 7”
AR1 “agreed”

The whole world knows what the Ref is thinking, the Ref has a few extra seconds to think about the consequences of what he is doing and he gets the moral support from the touch line. If the AR disagrees him, he will not contradict the Ref, there are code words used, if he thinks otherwise then he could have replied, “ nothing to add, it was a reckless tackle.” Reckless verses dangerous tackle communicated a suggested downgrade to yellow but the referee still has the option to keep it red.

The first responsibility of the referee in any game is the safety of the player and with high momentum impacts between flesh, bone and earth there is a lot that can go wrong. As players and spectators we all love the “ooff” factor of a big hit is exciting and part of the psychological ascendancy that a team looks to establish, however, we all want players to walk off the field. “Dominate do not destroy” is part of my front row talk and it applies to all players, who must have a responsibility to fellow players for their safety.

Much of the criticism of Alain Rolland has been that he has ruined the tournament, Wales were a better team than France and almost certainly would have won with 15 men, thus making a much more competitive final. However, the referee is tasked with managing that game, nothing more. He must make it safe, he must make it fair and he must must punish dangerous play within the parameters he has been given. What ever the consequences for Wales, Alain Rolland full-filled this function and throughout the rest of the game I found him to fair and consistent. Wales did enough to win that match, a little better luck with kicks and we would have still be looking forward to a Final on Sunday.

The broader topic must be how we want the game to be managed by the IRB. Many of the same people saying the red card spoilt the game and the tournament were bellowing for Mealamu to have been red carded for the O’Driscoll tackle. As fans we must be consistent, if we accept that red cards are to be a part of the game we can not apply them selectively. Perhaps red cards should only be used for a foul play; punching, gouging, head butts, ‘genuine’ spear tackles? The latter will keep the debate open on where the line should be drawn.
Posted by Unknown at Monday, October 17, 2011 2 comments:

Runs in the Lawrence family Referee fiasco sends out the wrong message
Posted by Unknown at Friday, October 14, 2011 No comments:

I think is pretty unheard of in the modern game for a senior referee to criticise another in such a public manner
Lawrence baffles Watson
Posted by Unknown at Tuesday, October 11, 2011 No comments:

The Mind of an International Referee

Rugby on a Cricket Day 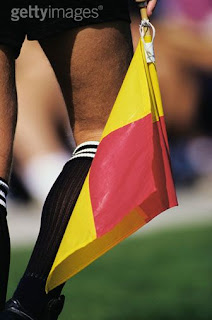 It was wall to wall rugby last week, wake up, watch rugby and 4 games to officiate at including my first appointment as an assistant referee.
Game one was  another first as it was a Daily Mail Cup U18 game in SE London, it was a new competition for me so I made sure I brushed up on the tournament rules. Both were state schools but one had a long rugby tradition but the home side where relatively new to it. The pre-match pitch inspection showed that the 5m line-out line was actually 10m in and thus the 15m line was at 20m. There were no flag posts either. I’m sure it wouldn’t happen at Whitgift. I agreed with both coaches that I would judge where the line-out would start and ‘throw not 5m’ would not be aggressively policed.
The game was fast and aggressive, the visitors where by far the most skilful but the controlled mayhem from the home side kept them in touch. This mayhem didn’t always help them, 3 yellow cards saw the home side play half the game with 14 men. The first should probably have been a red. The second row looked to strike a player with his head during a scrum. The other two where reckless straight arm high tackles. The scrums where troublesome as two opposing props constantly went in crooked, hard to apportion blame but they had been coached well on how to cheat, penalties where shared between them. The game ended with one try apiece, two penalties to a conversion and penalty saw the home side edge it 11-10. Their reward, a match against last year’s winners!
That evening saw me run the line for a development game under lights. A good performance from the man in the middle, I helped him out with some advice on what was happening on the opposite side of the scrum. We were not miked up so interactive communication was impossible. It was interesting to hear the disparaging coaching comments, I was able to introduce them the concept of “straight-enough” at the line-out.
The following day I was back to same school for an U15 match, this time the opposition was one of the top rugby schools in the area. The coaching staff even had ipads for match analysis! A bad fall on the hard ground saw a home player complain of back-pain, he was on the touch line but play started to get dangerously close so the coaches agreed to end the match, 43-3 to the visitors, only one more score before I would have been forced to call it a day anyway. The game did allow me to fulfil a teenage ambition, accompanying the PE-mistress around the back of the gym!
The final game was the first ‘proper’ game, a Surrey League 2 match in weather more suited to a cricket match. Strong running from the visitors and a more organised pack saw them easy winners at 32-3, the home side found some form in the final quarter but it was too late. They were pressing hard for a score but dropped the ball or conceded the turnover, evitably the visitors gave away a couple of penalties and the captain was sent to the bin for handling on the floor. “I thought could, I was the tackler?”, no you were laying on your back on the wrong side and picking up the the ball and throwing the ball back to your scrum half, is cheating in my book. Even after this the the home side failed to capitalise. After 80 mins of rugby in 30 degree heat the beer was cold and plentiful.
I’m please that all three games felt comfortable, teenage hormones and fast league rugby pushed me but I’m happy that I didn’t miss much and everyone was happy with the game I have them. The confidence that has developed over the last two season means I can stand further back and see more of the game and manage it without whistling too often.
Posted by Unknown at Friday, October 07, 2011 No comments:

I can't help but think that the English sin-bin will be bigger
We are American Rugby | American Sin Bin
Posted by Unknown at Friday, October 07, 2011 No comments: