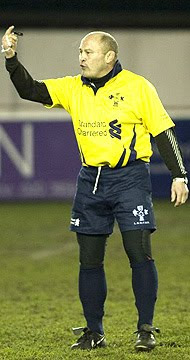 The London Society's latest recruit talks about his first outing with a whistle.
Brought back memories it did, well expect for the spectators, TV crew, international referees running touch. Otherwise much the same as my first outing

Brian Moore -I was flawless as a referee

Hopefully he will get further run outs and will ditch those stupid tights!
Posted by Unknown at Thursday, February 25, 2010 No comments:

Ref training last week was shaped by the need to be tough on the causes of crime, even in lower level games. Just because its a Level 11-14 game cheating spoils everyone’s afternoon. The players may be old, slow or just crap, but they know how to flop on the ball, handle in rucks, late tackle and punch without the ref seeing it. The answer is to deal with it, penalise and card if they are not listening.

Saturday’s game had all the above. The home side was a team I had already reffed this season, and it didn’t go well with a high penalty count and I should have shown cards earlier.

The game started badly for the visitors with two shoulder injuries in the opening 15 mins, with only one sub their early promise was soon eliminated. It got worse soon after as a late and borderline spear-tackle saw the tackled player off the field with a stinger in his lower back. The tackler was yellow carded. 13 men and the contest was heavily stacked against them. Still they turned around at half time only 10-7 down thanks to some desperate defending and a superb scrumaging.

The temper on the second half was tense and edgy, there were a few late hits from both sides and the two locks had their own private battle which they managed to keep hidden. The visitor’s open-side had a different view on what was ‘on your feet’ to me and the home side were persistently offside at the tackle area. At the time I seriously thought of binning a number of visitors, but I was conscious of keeping the contest going; 11-12 players would have made the game meaningless. I think the threat kept them on edge but was I being too nice. Looking back, the home side should has lost a player but at the time I was concerned about consistency between my approach to both teams. They eventually lost a player in the dying minutes as the visitors pounded the home try-line for a consolation score.

It was clear that a good deal of hidden punching was going on, and despite my best efforts I couldn’t catch anyone. The lock battle was at the centre of this. This was tough as the home captain was involved, a player that would be best described as Danny Grewcock’s evil twin. He calmed down after I told him he role as team enforcer was incompatible with being captain.

A home win 32-14 and a first season loss for the visitors. I was pleased with containment of the home side compared with our earlier encounter this season. I held the chat and comment more successfully than recently too. I suspect that this would have been much tougher if the visitors had remained at 15 and the scores tighter, but then my pocket would have been a lot busier.

Referee David Rose criticised by the Quims coach as his team gets spanked 46-6
Sky Sports Gloucester v Harlequins
I suspect that there was a lot more going wrong than just the referee's decisions?
Posted by Unknown at Sunday, February 14, 2010 No comments:

A background in cheating 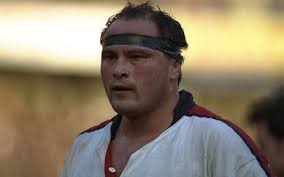 The Pitbull and IMHO one of the better TV pundits has been very vocal in his criticism of international refs and how the game's Laws are evolving. Following a presentation to the London Society in November (which I missed) and some constructive engagement on The Referee Forum, he has taken up the challenge and has completed a entry level referee training course. He is due to referee his first match next week, I suspect his touchline audience will be better informed than my first outing.
Brian Moore: my background in cheating will come in handy for life as a referee - Telegraph
I hope that he enjoys it and both sides take something from this but I suspect a Monday outing will mean his first match is not the Old Fartonians 4th XV that most referees start with . I wish him good luck.
Posted by Unknown at Thursday, February 11, 2010 No comments: 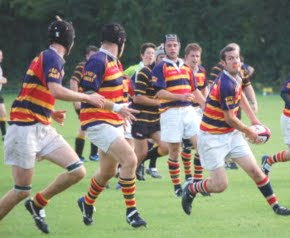 I haven’t been that active on here of late and that is largely due to lack of games to talk about. I went to some Autumn internationals, I was ill, Christmas came along and then we have had the frost. However, last week, some idiot forgot to tell me and Society that my game was canceled until 9.30 on the Saturday morning. This meant it was too late to get a reappointment. That isn’t as bad as couple of weeks before went I turned up at my home ground to find the game had been canceled. Its only phone call – please make it.
The previous week was an uplifting match. On paper it should be evenly balanced, a Jonap 1 merit fixture, but the home side had better organised forwards and the visitors weren’t up for tackling. It ended 73-7 but strangely it felt closer.
The only trouble came from a loose head, whose technique was to drive straight up and binding seemed to be optional. Two free kicks and two penalties and he was close to getting a yellow card before he was subbed as the scrum went uncontested. His excuse for the binding was an injury that prevented him getting his elbow up, ‘fit enough to play then fit enough to bind properly’ was my response.
I was impressed with the visitors since despite the thumping they received, there was no griping or back chat. I’m either getting better or they are particularly well behaved – shows it can be done.
No game for me this weekend as it the only game that counts all season; Wales v England.

I haven't commented much on this one, but it is a sorry tell of alleged fraud, deception and poor due diligence. With the club back in the hands of the good and true its time to look to the future.

What is needed a coherent plan which must start with what level funding the club can raise and which level of the game that will get them. Previous planning seems to have been to aim for the top level or bust; well now they are bust. What next?

I don't think the club have leveraged the brand successfully in the past; this must be addressed. Though I think it has been moving in the right direction, there is an enormous amount of untapped potential. London Welsh has good facilities and a great location which are under utilized.

Once the potential value of franchise has been properly assessed then the club has the hard decision to make. Can it afford to play in GP (not a chance), the Championship (probably) or will it be lower down.

London Welsh have to access if the value of franchise is enhanced or reduced by the 'soft 'n' friendly' family club with a good social atmosphere and the need to centre activity at Old Deer Park? London Irish is a much bigger and successful club because of its move from Sunbury. Many current members (myself included) won't like this but it may be for the greater good. If the new management maintains the status quo then the club may have to accept a lower league is the best balance of ambition and resources.

The membership and owners needs to realise the club is neither a ‘community resource’ nor a business but must recognise the success will come from objective business management and engaging the broader stakeholder community.

Finally, the RFU needs to end the arms race in the lower leagues. Salaries in the lower leagues are clearly at a level that is unsustainable and are only justified in buying promotion to the top level. However, like the rest of the country, debt and living beyond ones resources is doomed to failure; , , London Welsh and have all hit the skids this season. Simply, there is not enough money in the game to allow this to continue. The solution is either to pull up the draw bridge to the Premiership and allow funding and salaries to find its own level or if the RFU want to use the Championship as a development league then it needs to increase the funding available and impose a salary cap.