This blog has previously mentioned the proactive involvement of the RFU in establishing attitudes to the ELVs. Whilst I think they came to this late in the game, they, together with the WRU have successfully thwarted the Northern Hemisphere implementation of the Sanction ELV (free kicks for penalties).
Anyway, now we have all had a couple of months with the ELVs they are looking for our opinion once again. RFU Survey. I urge you all to go and have your say.
I thought I would share my answers. We should remember that the tougher stance on sealing off at rucks is not ELVs and no one is asking your view on that.
ELV 1 - Assistant Referee - Assistant Referees to provide additional information to the referee to assist in decision making.
Strongly agree – this formalising what has been done for number years. It is interesting to see the TMO being used to widen his contribution to adjudicate on tries and foul play
ELV 2 – Maul -Remove reference in Law to head and shoulders not to be lower than hips.
Disagree – I take the view that the maul should be held up, body positioning need to support this. Additionally, players going in and down are putting their neck at risk. I don’t see how this sits with the bridging (a bad thing apparently) directive at mauls.
ELV 3 – Maul - A defending team may pull the Maul to the ground.
Strongly disagree – It’s tough to tell if it’s a pull down or a collapse. It removes a skilful, team-work element to the game. Eight blokes onto one sternum is going to hurt and eventually cripple someone. Mr Murdoch and Mr O’Neil don’t think it puts bums on seats but try telling that to The Shed or Welford Rd. If it’s dangerous for U19 then it’s dangerous for all
ELV 4 - Lineout and Throw When a defending player receives the ball outside the 22 metre line and passes, puts or takes the ball back inside the 22 by any means, there no gain in ground
Agree – it’s proved a bit tricky to police with TJs, but it puts more pressure on the defending side and maintains some advantage for the attacking side. That aside, the aerial ping-pong seen in top matches is dull and I hope coaches come up with a more imaginative tactic.
ELV 5 - Lineout and Throw- A quick throw may be thrown in straight or towards the throwing team’s own goal line
Strongly agree- OK, so it speeds up the game and level 12 often needs a few breaks, but it has triggered some great counter-attacking runs. Anything that reduces the number of lines Wales need to complete the better
ELV 6 - Lineout and Throw There is no restriction in the number of players who can participate in the lineout from either side (minimum of 2).
Agree – Perversely, this has decreased the space for the fly-half as the Kiwis have used the additional numbers to launch defence from the lineout, rather than mid-field. From a ref perspective, its one less thing to watch for.
ELV 7 - Lineout and Throw The receiver in a lineout must stand 2 metres back from the lineout.
Does not effect the games

ELV 8 - Lineout and Throw The team not throwing into the lineout MUST have a player in the 5 metre channel who must be 2 metres away from the front of the lineout. This player cannot join the lineout until the ball has left the hands of the player throwing in.
Agree/disagree- I’ve picked this one up once. If the defending team want to leave this channel open its upto them
ELV 9 - Lineout and Throw Lineout players may pre-grip a jumper before the ball is thrown in.
Agree – This has been ignored for years
ELV 10 - Lineout and Throw- The lifting of lineout players is permitted
Agree - ditto
ELV 11 – Scrum - The offside line for a player who is not in the scrum and is not one of the scrum halves is 5 metres behind the hindmost foot of the scrum
Agree – The additional space seems to be used effectively for most teams, but policing it is very difficult without a touch line team. If there is too much nonsense with the front rows then I don’t spend much time watching the back-line. Still, I have picked it up a couple of times.
ELV 12 – Scrum - The defending scrum half must stand next to his opponent when the ball is put into the scrum. Once the ball is in the scrum the scrum halves may then either (1) follow the ball ensuring that they remain behind the ball (2) retreat behind the hindmost foot of their players in the scrum or (3) retreat behind their side's 5 metre offside line, but if they do so they may not come forward again until the scrum is over.
Not affected – Generally, this has needlessly complicated the pre-match team talk
ELV 13 - Posts and Flags around the Field The corner posts, and posts at corner of touch , in goal and dead ball line, are no longer considered to be in touch in goal except when a ball is grounded against the post.
Strongly Agree- At my level, with no TMO, it’s made life much easier.
Posted by Unknown at Tuesday, November 25, 2008 1 comment:

Apologies for the light blogging but I'm injured at present. A torn cartilage in my ankle. In the mean time I shall be watching Wales take on the All Blacks with this image in my mind.

Posted by Unknown at Thursday, November 20, 2008 No comments:

Are you thinking what I'm thinking...? 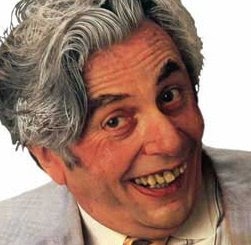 I think Paul Ackford must have read what I said.

I see the Aussies are blaming the ref again for their poor showing against Italy.. and what is it they call us, whinging poms?
Posted by Unknown at Monday, November 10, 2008 No comments: