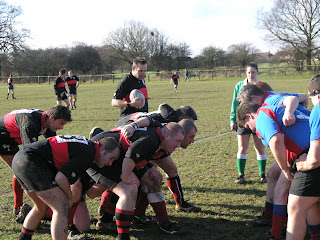 One of the great benefits of the London Society of Referees is that it is able to attract great speakers to training nights. Wayne Barnes, a graduate of the society is a regular at meetings and last night one of the newest premiership referees PJ Doyle was giving the benefit of his wisdom. The main event was Neil Hatley, the Guinness premierships, most experienced prop and academy coach at London Irish.
Neil gave a fantastic talk on scrumaging, what players and coaches want from referees and how to achieve a fair contest. The England scrum coach Phil Keith-Roach gave an excellent talk some time ago, but Neil added a practical and well illustrated angle.
Key recommendation were to get front rows square and stationary before calling the engagement and what was extremely useful was to show front row misdeeds. Its all well and good talking about what should happen and what to look out for, but having it played to you in slow motion with an expert pointing it out was marvellous. The fact that many of these infractions were un-penalised by international referees provided much debate. It made me realise how much I had been missing or at least allowed to go, not realising the disadvantage I had perpetuated. Clearly a new vigour will apply at Saturday’s game.
ELV and IRB directives also came under discussion, as you might expect this included the 5m scrum offside enforcement, or lack there of. There is so much to watch at scrums, primarily because of safety, the distant drift of defenders to the ‘old’ offside will rarely be caught, particularly without touch judges. Out of the corner of the eye, 3m looks much the same as 5m. Unless the scrum is going well, not even the premiership referees appear to have penalised this yet.
Finally, we are under strict instruction from the IRB to enforce players onto their feet at rucks. We are all conscious of defending players diving off their feet to ‘win’ (read kill) the ball. Less emphasis has been placed on attacking players driving over the ball and going to ground or bridging the tackle. This prevents and obstructs the opposition trying to ruck the ball fairly, and needs to be punished. You have been warned, plenty to take into tomorrow’s game.
Posted by Unknown at Friday, September 19, 2008